In 1986, Eddie and his friends are just kids on the verge of adolescence. They spend their days biking around their sleepy little English village and looking for any taste of excitement they can get. The chalk men are their secret code; little chalk stick figures they leave for each other as messages only they can understand. But then a mysterious chalk man leads them right to a dismembered body, and nothing will ever be the same.
In 2016, Eddie is fully grown, and thinks he’s put his past behind him. But then he gets a letter in the mail, containing a single chalk stick figure. When it turns out his other friends got the same messages, they think it could be a prank… until one of them turns up dead. That’s when Eddie realizes that saving himself means finally figuring out what really happened all those years ago.

Set in an unassuming small English town, filled with murder, mysterious chalk figures and lovable characters, this page turner will surely spice up your reading list.

The girl’s head rested on a small pile of orange-and-brown leaves.

With an opening like this, you just know you are in for something good. When every so often I dramatically faint back into my pillows, wishing for a cleverly plotted thriller that will take me to places, this is exactly the sort of book I’m talking about. There’s a massive trash pile of thrillers out there, ranging from meh to okay, but finding The Chalk Man is like the moment you dig out a rare gem from underneath all that sludge.

The narrative alternates between 1986 and our present days. There’s always a hanging question or an unexpected revelation to increase your growing apprehension and make you turn the pages well into the night. 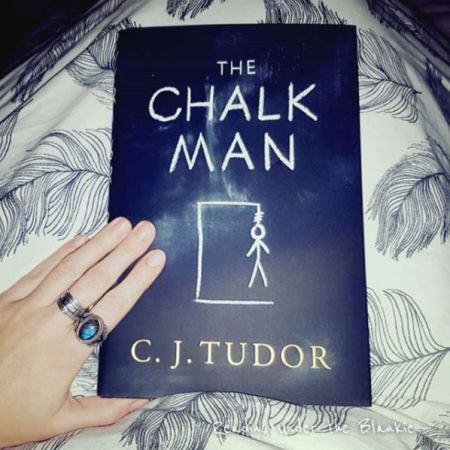 In 1986 Eddie Adams and his friends Hoppo, Fat Gav, Metal Mickey and Nicky are your typical twelve year old kids – with amazing nicknames. They love riding their bikes, hanging out in the park, building a club house and creating secret signs as a way of sending each other messages. But then their secret signs start appearing all over town. (The blood is pouring out from the pages in bucketfuls, oh yeah.) Add to this a strange, pale man, a body found in the woods and some creepy religious stuff going on around town, and the kids are sure in for some excitement.

All the chapters set in the past are very atmospheric, evoking Stand By Me with a bit of It by the Master (Stephen King, that is, for you non-fanatics).

In 2016 Eddie, who is now Ed, is still haunted by the events of that summer. The arrival of the cards decorated with chalk figures and a visitor from the past dig up memories that are best forgotten. As we fly through the pages, more and more questions arise. Who can we trust? Who is guilty? Guilty of what? What exactly happened back then?

My life has been defined by the things I didn’t do. The things I didn’t say. I think it’s the same for a lot of people. What shapes us is not always our achievements but our omissions. Not lies; simply the truths we don’t tell.

Even though The Chalk Man is an exceptional debut, it had its flaws. Most of the loose ends were masterfully tucked in at the end, but a few others were just left there hanging, forgotten. If it wasn’t for the gut punch at the end, this could have ended badly. (See what I did there?)

We think we want answers. But what we really want are the right answers. Human nature. We ask questions that we hope will give us the truth we want to hear. The problem is, you can’t choose your truths.

C.J. Tudor created a fast-paced, chilling tale that will surely leave you satisfied. It’s truly one of those books worthy of reading in your blankie fort. Don’t have one? Well…

Get The Chalk Man