“In Irish, Rúin means something hidden, a mystery, or a secret…” 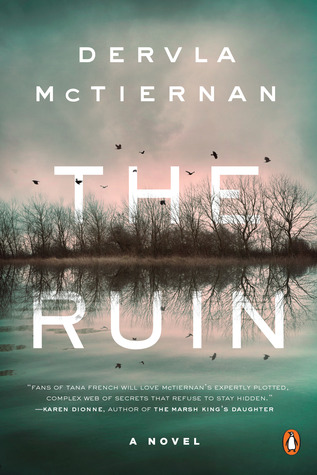 The Ruin by Dervla McTiernan

It’s been twenty years since Cormac Reilly discovered the body of Hilaria Blake in her crumbling Georgian home. But he’s never forgotten the two children she left behind…
When Aisling Conroy’s boyfriend Jack is found in the freezing black waters of the river Corrib, the police tell her it was suicide. A surgical resident, she throws herself into study and work, trying to forget – until Jack’s sister Maude shows up. Maude suspects foul play, and she is determined to prove it.
DI Cormac Reilly is the detective assigned with the re-investigation of an ‘accidental’ overdose twenty years ago – of Jack and Maude’s drug- and alcohol-addled mother. Cormac is under increasing pressure to charge Maude for murder when his colleague Danny uncovers a piece of evidence that will change everything…

You know those books that are neither good, nor bad? Just kind of meh… The Ruin was like that for me. A pretty straightforward mystery, set in Ireland. Manipulating two timelines, the author weaved two cases together, and connected them with a detective who was involved in both.

DI Cormac Reilly is an all right dude, but nothing particularly stands about him, apart from his relationship status, which is pretty normal, considering most fictional detectives are not very lucky in this department. Cormac has a girlfriend though with whom they actually like each other, so that was refreshing.

Office life on the other hand is not easy for our detective. His colleagues are a bunch of good-for-nothing assholes who waste a lot of time on office intrigue and badmouthing each other, rather than actual police work.

There was a seemingly random story line with a teacher who was apparently involved in some shady shit back in the 80’s and then moved to the US, but I seriously can’t tell how they figured this out, or how it mattered to their case. I must have zoned out at some point.

I do remember the weirdest things though. Like how it rained a lot, and all the women kept washing their hair all the time.

If you don’t like reading about child abuse and horrible things being done to youngsters, you probably want to skip this.