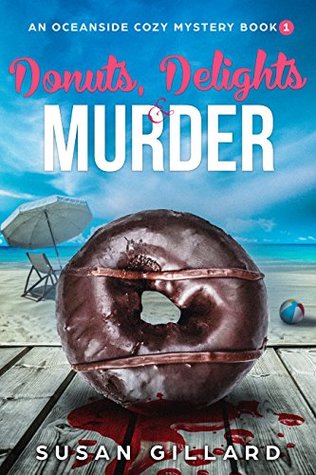 Could this tropical paradise actually be hiding a deadly poisoner?
Heather and the gang have finally made their move to Key West. However, it’s no vacation.
Heather has to balance unpacking her new home, filling her new shop with Chocolate Hazelnut Donuts, and discovering who killed her new neighbor.
When the owner of the seafood restaurant next door to her is found poisoned, some other neighbors blame the newcomers from Donut Delights for the crime.
Now Heather must uncover the secrets of the other shop owners in order to clear her name and find the real killer.

Well, here we are. My fist ever cozy mystery as far as I can remember, and it was a flop. Big time. I must admit I was bedazzled by the delicious looking cover more than anything. #regrets

This may well be a spin off kind of book (even though there are over 50 books in this series, so fuck me if I know), and readers who followed the main character in the author’s previous series are familiar with her, but to me, as a newcomer to this whole thing, it just seemed the characters are lacking depth. I don’t know who they really are, how they feel about thing and what motivates them. Hell, I don’t even have a clue what they look like, and it bothers me. Sometimes authors don’t spend a lot of time describing their characters, but I still form a picture in my head. This time? I drew a blank with Heather. For some reason I thought Amy kind of looks like Sarah Baker, the actress who plays Amy Santiago’s bestie on B99. Can’t explain why though.

I got no real sense of the place either. They are supposed to be in this gorgeous seaside town, but I’ve seen none of that. I can’t even tell what season they were in. The donut detectives ended up on the beach, so I’m assuming it was summertime, but if that’s the case, I want to see them sweat! Is that too much to ask for?

Heather and her sidekick are licensed private investigators on top of being amazing donut makers, and they sure as hell reminded everyone in every chapter about this fact. You know, in case we forgot. Considering I’m not stupid, it was a tad insulting. Need the word count? How about some cool ass descriptions to set the scene?

There was way too much dialogue. In fact, majority of the story played out via inane dialogues between various characters, and the two investigating donut ladies came across as gossiping busybodies, rather than actual detectives. Why on earth the actual police even asked their opinion is beyond me.

The mystery itself was quite plain, and not particularly twisty. Follow the crumbs, my ass.

I thought I will at least find some donut recipe at the end, because that chocolate hazelnut creation they fed to the whole neighbourhood sounded delish, but no such luck.

What’s your favourite donut flavour?
Do you read cozy mysteries? Can you recommend some that… you know, don’t suck?