You know, sometimes I don’t like to yap about a book too much, but still, they are worth mentioning. Eh… Happens. But let’s see what I thought of them. 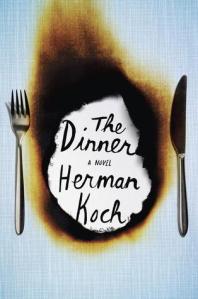 The Dinner by Herman Koch

Let me come out straight, and mention that this is not a thriller. Even though it’s been categorized as such on Goodreads. It’s also not a pleasant book, but I think it’s important to note, it should be enjoyed for what it is. A nasty little sneak peak into the lives of two families.

The story takes place during an excruciating dinner in a restaurant where these two families meet to discuss something horrible their sons did. The whole thing is laid out like a menu, the chapters are divided into aperitif, main course, and so on, interspersed with flashbacks and all sorts of things that sidetrack and interrupt the conversation.

It’s really rather dreadful. So, hats off to the author, really, because boy, did I feel the pain. From the restaurant manager’s hovering little finger, pointing out each dish, complete with a full back story to getting lost in the timeline quite often, it was a proper ordeal.

16-year-old Vivvy turns her feminism up to combat the school misogynists. Time to fight like a girl! I loved the take on the topic of feisty girls taking down asshole boys, dickhead teachers and just fight back against everyday sexism. It was serious, but also cute and funny. Vivvy was not only a smart girl, but also a good friend, not only to her actual friends, but to the new girl, to other girls she didn’t even have anything in common. The whole girrrl power thing? Pretty awesome.

Mind you, no wonder Vivvy turned out so cool. Her inspo was her mum, and if I ever become a mother, I hope I will as supportive and wonderful as this fictional lady.

Until the Day I Die by Emily Carpenter

Another cool mum-daughter duo in this one! Erin, her husband and two of their friends owned the biggest tech company. After the death of her husband Erin is not herself. Understandable! But there’s something dodgy going on with the company as well. While Erin is drowning in her grief, her geeky daughter, Shorie is trying to figure out what the hell is happening, while also starting university.

Until the Day I Die was pretty twisty and kept me on my toes. Poor Erin was shipped off to some fancy schmancy Caribbean resort to get over her depression while Shorie made friends with some other geeks and started snooping around online as much as offline.

The posh resort soon turns into a nightmare and the more dirt Shorie and her friends dig up the plot thickens. Is it a bit over the top? A bit! But! It was so freakin’ entertaing! Woo!

Have you read any of these?

Were you a rebel in high school?