A gorgeous country side manor, a bunch of posh twats and a weekend full off blood sports. Recipe for a disaster, or a delicious thriller? Well, how about both? 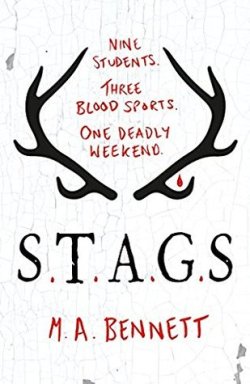 Nine students. Three bloodsports. One deadly weekend.
It is the autumn term and Greer MacDonald is struggling to settle into the sixth form at the exclusive St. Aidan the Great boarding school, known to its privileged pupils as S.T.A.G.S. Just when she despairs of making friends Greer receives a mysterious invitation with three words embossed upon on it: huntin’ shootin’ fishin’. When Greer learns that the invitation is to spend the half term weekend at the country manor of Henry de Warlencourt, the most popular and wealthy boy at S.T.A.G.S., she is as surprised as she is flattered.
But when Greer joins the other chosen few at the ancient and sprawling Longcross Hall, she realises that Henry’s parents are not at home; the only adults present are a cohort of eerily compliant servants. The students are at the mercy of their capricious host, and, over the next three days, as the three bloodsports – hunting, shooting and fishing – become increasingly dark and twisted, Greer comes to the horrifying realisation that those being hunted are not wild game, but the very misfits Henry has brought with him from school…

Movie geek Greer is the new girl at St. Aidan’s boarding school, and as a scholarship student, she’s not up enough to the standards of the toffs attending the establishment to actually make friends with her. Not being an aristocratic offspring is not the only reason for these kids to look down upon someone, you see. There’s such thing as good money and bad money, apparently. Nell, another student, is well off, but she didn’t born into money, so should be shunned as well.

To their amazement, the two girls somehow manage to end up on the limited guest list for a weekend getaway, organized by the Medievals, this elite group of six students, lead by the enigmatic Henry de Warlencourt (a.k.a. the most gorgeous boy ever), who seemingly rule the school. The third guest is Shafeen, who is considered royalty in his native India, and a foreigner to be looked down upon at St. Aidan’s. Charming kids, eh?

I was totally engrossed in this one. S.T.A.G.S. had everything I personally look for in a thriller. The sense of something sinister constantly lurking just around the corner, unsmiling and cold servants who may or may not be up to no good and a group of teenagers armed to the teeth.

I loved Greer too. She reminded me a lot of myself when I was 17. You know, the type of girl who lacks self confidence, and gets weird ideas when it comes to romantic involvement. I was the sort of girl who thought attention equals attraction. Oh, that guy was nice to me, so now I  may have a crush on him and will ignore all my feelings that tell me he might not be right for me, because I thought he was a jerk, but what if I was wrong… Yes, it sucks. But not uncommon.

Greer is a smart girl though, so with the help of her new friends they set out to get to the bottom of the odd things that seem to happen to them over the weekend. Why is the head keeper lurking after them in the dark? How is Shafeen’s dad connected to the Warlencourts? Are they in danger or is it just their imagination running wild?

A twisted and eerie story, heavily infused with ominous atmosphere, S.T.A.G.S. will appeal to readers who enjoy dark thrillers that play tricks with their mind.

P.S. The story was quite detailed on the huntin’, shootin’ and fishin’ aspects, so if you don’t like reading about how animals get killed and then subsequently prepared for dinner, you might want to skip this. I now possess way more knowledge about venison than I ever hoped for.